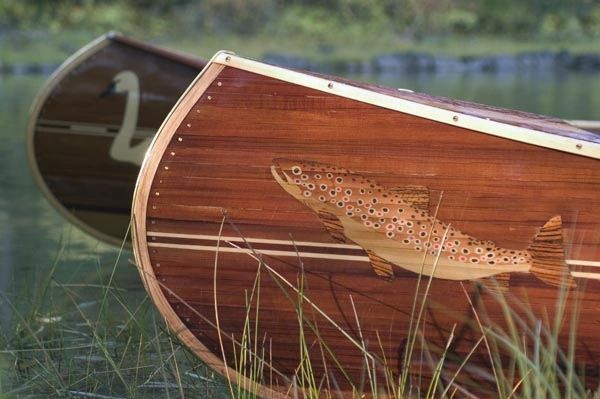 By:  Nancy Reece Jones for the Great Falls Tribune

SWAN LAKE — Driving on Route 83 north of Swan Lake in 2004, Bob Moore couldn’t resist stopping at the sight of a masterfully handcrafted, red-cedar-strip canoe displayed in front of an unpretentious cabin.

“I ordered a 16-foot canoe on the spot after stumbling on Morley Canoes,” said the Seattle resident, who later bought a rowing/sailing skiff.

“They are as fine a team of craftsmen as you’ll find in any trade,” he said of Greg and Steve Morley, the father-and-son owners.

The Morleys, avid outdoorsmen and passionate paddlers, have made a mark in the wooden boat-building industry that extends far beyond the Treasure State.

“We’ve shipped boats all across the United States as well as Germany, Japan, New Zealand, and England,” said Greg.

A forester by training, Greg became hooked on canoeing in the 1960s and built his first canoe from stressed plywood in 1966.

By 1972 he began boat-building in earnest. He and his wife Anne settled in the Swan for the lifestyle it provided their family.

“I had fond memories of spending time with dad and my brother in the shop,” said Steve, “but never intended to follow in his footsteps.”

Instead, he and his wife Jill, a Great Falls native, moved to Hawaii in 1994. Ten years and three children later, however the couple decided to move back to be closer to family.

“It wasn’t until we got back that I realized that with Dad getting older, if someone didn’t learn the trade, it might just disappear,” said Steve.

In the past decade, the two men have worked out a staggered system for making boats and enjoy exchanging ideas and coming up with process refinements.

“We each do a boat start to finish,” Greg said. “That way we have a full connection to it and have the person who’s buying it in mind while we’re working. We’re not just popping out parts.”

Although canoes are the most popular order, they build kayaks, standup paddles boards, small skiffs, surfboards and other custom watercraft. They also make canoe and kayak paddles and oars.

On average, each spends a month constructing a canoe, starting with cutting ¼-inch strips of western red cedar from rough boards. They carefully lay out the strips on a form with an eye to harmonizing the cedar’s natural coloring, which ranges from almost black to nearly white.

“We use ash and cherry for the gunnels, thwarts and seats — ash provides both lightweight strength and a nice color accent — although some clients request black walnut and mahogany,” Steve said.

What gives a Morley canoe its strength is its composite structure: an overlay of fiberglass soaks into the wood and makes the hull extremely stiff.

Prices for their canoes range from about $6,000 to $7,000, depending upon the detail and size of the boat and whether it has customized inlay and artwork.

The finished products are invariably stunning, but it’s performance that matters most to the Morleys.

“Many of our customers have said emphatically that their canoe is the best investment they’ve made because of the intrinsic value of the experience they have on the water,” said Greg.

Dean Ziehl is one of those delighted customers. Ziehl and his family live in Los Angeles, but spend as much time as possible at their place in Bigfork.

“I have a garage full of Morley canoes and kayaks,” he said, “including three small ones Greg made for our 12-year-old triplet daughters.”

Like Moore, he appreciates the fact that the boats are superbly functional as well as incredibly beautiful.

“The Morleys make phenomenal artistic canoes that hold up under any conditions,” he said. “Their work is a real labor of love.”

Better yet, see us in person!

We enjoy visiting with our customers, so feel free to visit during normal business hours or call us if you want to stop by after hours.